Full-time RV’ers often bring their pets with them. And while most will be dogs, other types of pets are sometimes along for the ride too. But can you have an aquarium in an RV?

It is possible to have an aquarium in an RV. The primary issue is securing the tank when the vehicle is in motion to limit water spillage and ensure the fish are not harmed. Often, placing the tank in the shower with a secure lid is the best option while in motion.

But it’s not quite that simple.

In this article, we’ll explore if it’s okay for fish tanks to have a sealed lid in an RV and if fish tank lids need air holes. But we’ll also find out if the water will splash out of a fish tank while you’re driving the RV. And we’ll talk about options to keep the tank from sliding around while sitting in the shower.

Offending fish tank. Note well. Sealed all sides and has a lid. pic.twitter.com/MJzbpDI9

Can fish tanks have a sealed lid in an RV?

Yes, fish tanks can have a sealed lid in an RV, but typically they have air holes so that the tank can be oxygenated. They also minimize evaporation and consequently help reduce humidity in your RV. But some prefer to remove the lid when the RV is not in motion.

In addition to the above, it keeps the water clean and helps retain the heat in the tank. It also prevents foreign objects from falling into the aquarium.

It keeps the odor of the fish contained. If you have children and other nosy pets in the RV, the lid is a great barrier. If you have a cat, you definitely want a sealed lid.

A sealed lid is also great to prevent the water from splashing out and causing damage or mess.

But the flip side of having a sealed lid is that you’ll need to remove it anytime you want to do anything in the aquarium, and a tank without a sealed lid could be a bit cheaper.

And some people think that an open tank looks more beautiful.

This hole was drilled out on the Eco Level to allow you to put an air stone into the tray #aquarium #aquariumdesign #original #plantingbed pic.twitter.com/tYwwJSjadm

Yes, fish tank lids need air holes for the gas exchange with the water. So never put fish in a completely sealed container for any length of time.

Having plants in the tank also facilitates the oxygenation process.

Most lids are designed in such a way that water can circulate very well. There are even some that have a part of the lid partly open. Some folks also use air stones and decorative water bubbles in their aquariums.

You’ve probably considered how the weather impacts living in an RV and may have wondered if you can live in a Class A motorhome in the winter.

You’re in luck because that is what I explored in a recent article.

How many of you #Airstreamers, #RV‘s,#fulltimers, #glampers have an aquarium in your RV? pic.twitter.com/9qQHNq2AeX

Will the water splash out of a fish tank while driving in an RV?

Water may splash out of a fish tank while driving in an RV if the tank is filled to the top and does not have a lid. Use a lid on the tank and place the tank in the shower stall while in motion to keep the mess to a minimum.

But if you’re going to a place that’s close by and the road is relatively smooth, you’ve got nothing to worry about. On the other hand, if you’ll be driving across the country, moving fish around in an RV can be a bit of a challenge.

Let’s check out a few things that would help:

Ideally, you want to reduce the water level substantially if you’re driving, unless if you’re only driving slowly and to a place close by.

Unless it’s a very small tank, you don’t even want to lift it into the RV while it’s full. If you reduce the water level well enough, you can prevent water from splashing out.

But there’s the risk of tripping and dropping it, having a cut, or a dropped or broken tank if it is a heavy tank.

You can transport small to medium-sized fish in fish bags placed in coolers or Styrofoam shipping containers to maintain proper temperature, while large fish should be transported in buckets, tubs, or coolers.

Ensure that you make use of battery-operated air pumps in containers with large fish when transporting them while you use fish bags for the smaller fish.

You’ll want to cover the containers (that have large fish in them) with something that leaves space for air to enter. Polycarbonate from a DIY store or some garden netting would be great, as the fish can’t jump out, but they can have enough oxygen.

Don’t feed them a day before, during, or after you transport them (they’ll be fine).

I don’t think it is very safe driving with a fish tank full of water with a fish? Bizarre! pic.twitter.com/TAwsuqGTGR

Is the driving motion bad for fish in tanks in an RV?

Driving with a fish tank is not bad for the fish unless driving in very rough terrain and they’re being shaken over and over again. Fish experience stress, just like other animals. But if they are in an aerated, water-filled container, and the driving is normal, they will be fine.

A change in their habitat or disturbance in their outline could affect them negatively.

But there are RVers who have aquariums and who transport their fish around. As long as they are in a familiar environment and the journey is not taking too long, you have nothing to worry about.

Most fish can survive while being transported for 48 hours, but beyond that, the likelihood that they won’t survive increases.

After all, think about the ocean.

It’s hardly completely still. There are big waves, tides, and even hurricanes, and the fish live in that environment 24/7. A little driving motion will be just fine.

Thinking of living full-time in an RV?

Before you sell everything you own and say goodbye to city life, you’ll agree it’s smart to find out the pros and cons of living full-time in an RV.

That’s what a recent article of mine is about. In it, I shared the pros and cons, looked at whether RVs are ideal for long-time living and what it’s like to live in an RV full-time. I even revealed whether it’s legal to live in an RV.

I set up a little 5 gallon aquarium pic.twitter.com/dh2aq5DzJG

What is the best-sized fish tank for an RV?

A 5-gallon aquarium fish tank is the best-sized fish tank for an RV. This ensures the fish have enough room while still being easy to move before driving. 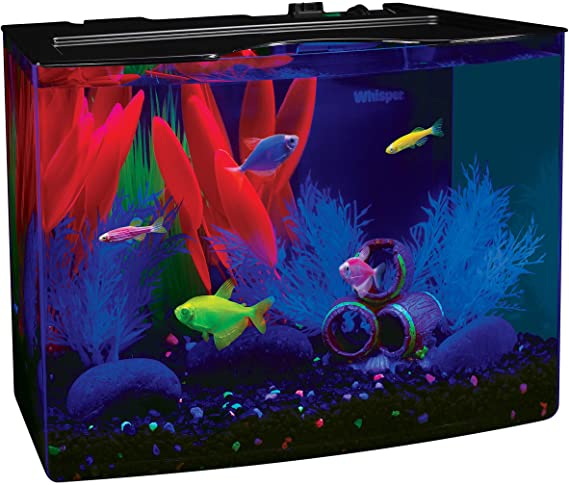 CLICK HERE to check out my favorite one on Amazon.

GloFish tank kits look beautiful and come with everything you need to get started. Energy-efficient blue LED lighting gives it a cool fluorescent look.

The lid keeps fish from jumping out and reduces evaporation. And it comes with internal filtration — as the filter cartridge catches waste and debris, keeping the water clean.

In the article, we explored if it’s okay for fish tanks to have a sealed lid in an RV and if fish tank lids need air holes.

But we also found out if water will splash out of a fish tank while you’re driving the RV.

Then we considered whether the driving motion can have a bad effect on the fish. Lastly, we wrapped things up by checking out the best-sized aquarium kit.

Image by Isaac Levy from Pixabay

You’ve likely heard that dogs make great traveling companions in an RV. But what if you want to bring your cat along on your adventures? Here are my best tips on how to live in an RV with a...

Taking your dogs with you on your RV trips is not only great for them, but it can be great for you as well. With that being said, there are a few things that you can do to make the trip go smoothly....